Elliot Glicksman has devoted his legal practice to
representing crime victims, helping them navigate the criminal justice system and receive compensation for the devastating harm they have suffered. He is a Past President of the Arizona Association for Justice, a past Advisory Board Member for the National Crime Victims Bar Association and the current President of Homicide Survivors Inc. Among his legal accomplishments are his listing in Best Lawyers in America, Super Lawyers and his AV rating in Martindale Hubbell. He has been certified as a  Specialist in Wrongful Death cases by the State Bar for over 25 years. Elliot was the first President of the Tucson Citizen’s Police Advisory Committee, and is a founder and the President of Jazz in January, the Tucson Jazz Festival. He has been twice named as one of the top 50 Pro Bono volunteer lawyers in the State of Arizona. Elliot has served as the emcee and auctioneer for the Gootter Foundation since its inception.

Dr. Lori Mackstaller began her medical career as a registered nurse at St. Joseph’s Hospital in Phoenix in 1967 before going on to earn her M.D. at the University of Arizona in Tucson, a short 30 years later. She completed her residency in internal medicine at the University of Arizona. She has served on the Board of the American Heart Association, the Sarver Heart Center Advisory Board, the National Scientific Internal Medicine/Family Practice Advisory Board, the Hilton Head Health Institute, the Arizona Commission on Women’s Health, and the Board of Medical Examiners. Dr. Mackstaller has taught classes at the University of Arizona College of Medicine, lectured on women’s health and heart issues and authored numerous medical journal articles. Dr. Mackstaller received The Woman On The Move award from YWCA.  She hopes to continue to educate women and the community as a whole thereby decreasing the risk of heart disease.

Rich has been an inspiration from the beginning of his career. At age 25 he was the youngest head coach in the country. In 2001, Rich coached the West Virginia Mountaineers and led them to six straight bowl games. He has been named Coach of the Year seven times. Rich spent two seasons coaching the Michigan Wolverines. In his first season at Arizona, the Wildcats finished 8-5 with a win over Nevada in the New Mexico Bowl. The Wildcats posted an 8-5 record in Rich’s second season with a win over #5 Oregon. In his third year, the Wildcats were 10-4, and a top ten team in the nation. They won the Territorial Cup, the Pac-12 South, and played in the Fiesta Bowl. Rich was named 2014 Pac-12 Coach of the Year.

Rich has embraced the community and has dedicated his time to Kids of Steele Foundation and Boys and Girls Clubs of Tucson among many other charities. Rich has been a supporter and spokesperson for the Gootter Foundation for the past three years. He has graciously given his personal time to participate in our events and inspires us to stay in the game and keep moving toward our goal of eradicating sudden cardiac death. 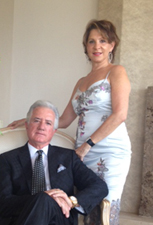 The Steven M. Gootter Foundation honored Humberto and Czarina Lopez with its Philanthropic Award at the 2014 Gootter Grand Slam. Bert’s involvement in charitable organizations focuses on community building in his home state of Arizona. He supports causes related to education, health and welfare. His community service includes board memberships at the University of Arizona and throughout the community. His efforts have been recognized by numerous organizations including Father of the Year; City of Hope Man of the Year from the National Jewish Hospital Research Center; the Outstanding Tucson Citizen Award; and as Man of the Year by the Tucson Chamber of Commerce. 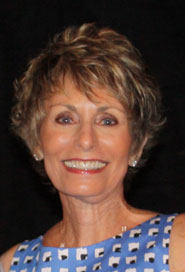 The Steven M. Gootter Foundation honored Ginny Clements with its Philanthropic Award at the 2013 Gootter Grand Slam. Clements, Chairman of the Board of Golden Eagle Distributors, Inc. has an extensive background of service to the Tucson community. Her affiliations include membership on the boards of the University of Arizona Foundation, Carondelet Neurological Institute, Junior Achievement of Arizona and the Steele Children’s Research Center. A member of Angel Charity for Children, Inc. since its inception in 1983, she served as the General Chairman in 1990 and currently serves on the Advisory Board. Ginny and her husband Tom Rogers have four children and six grandchildren. 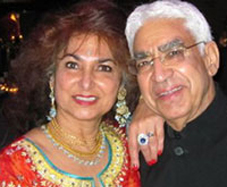 The Steven M. Gootter Foundation will honor Dr. Gulshan and Neelam Sethi with its Philanthropic Award at the 2012 Gootter Grand Slam. The Sethis have been married 40 years and have made a wonderful mark in Tucson through numerous philanthropic endeavors including Angel Charity for Children, the Tucson Children’s Museum, the University of Arizona and as benefactors of the Fox Theatre where they produce the popular Bollywood at the Fox and BollyKids events. They have two children and five grandchildren. 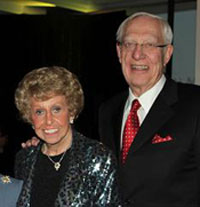 In 2011 the Steven M. Gootter Foundation honored Alfie and Allan Norville with the the Philanthropic Award. Alfie and Allan were honored as exceptional examples of philanthropy and making a difference in the lives of others.

The Allan & Alfie Norville Endowed Chair for Heart Disease in Women Research was established at the University of Arizona Sarver Heart Center in 2006. They are both on the board of the Sarver Heart Center and their campaign against heart disease continues each and every day. The Gootter Foundation is humbled by their example of leadership and philanthropy in our community and honors the Norvilles for their inspiration in achieving our goal of finding a cure for Sudden Cardiac Death. 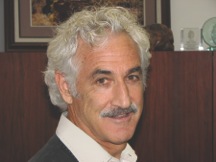 The Steven M. Gootter Foundation honored Bobby Present with its Philanthropic Award at the 2010 Gootter Grand Slam. Present is a founding member of The Steven M. Gootter Foundation. During his tenure as President, the organization has raised $1 million toward defeating sudden cardiac death. A native Tucsonan, and senior vice president at RBC Wealth Management, Bobby has been a dedicated volunteer for his entire adult life. Bobby was recognized by the Steele Memorial Children’s Research Center as one of the 2007 “Fathers of the Year” and received the Man of the Year award from the Jewish Federation of Southern Arizona in 2000. 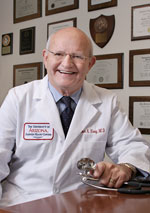 Dr. Gordon Ewy was honored as the recipient of 2009’s Steven M. Gootter Foundation Philanthripic Award. Dr. Gordon A. Ewy is professor of cardiology and director of the Sarver Heart Center at the University of Arizona College of Medicine. He occupies the Gordon A. Ewy, MD, Distinguished Endowed Chair of Cardiovascular Medicine, a unique honor in that it is extremely rare for someone to occupy his own named chair. Dr. Ewy has been named a “CPR Giant” by the American Heart Association for his early research on defibrillators and defibrillation. He continues to be listed as one of the best doctors in America.

Dr. Ewy is the co-author of four books and numerous scientific publications that include original research contributions, reviews, book chapters and editorials, with more than 270 of these publications listed on the national PUBMED. His primary research focus has been in the field of cardiopulmonary resuscitation and he is active in a busy cardiology practice and as an educator.

As director of the Sarver Heart Center, Dr. Ewy leads more than 175 physicians and scientists toward attaining a goal of a future free of heart disease, vascular disease and stroke via the academic principles of research, education and patient care. His success in developing resources for the center was acknowledged in 2010 when he received the Eugene G. Sander Endowed Faculty Fundraising Award from the University of Arizona Foundation Board of Trustees.

He started the Resuscitation Research Group at the Sarver Heart Center that pioneered Chest-Compression-Only Resuscitation, a technique that has been shown to not only be easier to learn and perform than conventional CPR, but also to be more effective for out-of-hospital primary cardiac arrest. 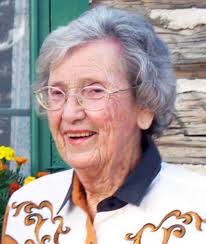 Bazy Tankersley’s most satisfying endeavor throughout her life has been in the field of education. During the years she lived in Maryland, she founded two elementary schools. The second one, after many successful years, went on to include grades one through twelve. In 1980, she and her friends Jane Ivancovich and Margaret Modine founded St. Gregory School in Tucson, for which she still “runs errands”. In the past, she served her communities by being on teachers’ college boards – first in Illinois and later in Maryland.

Some of her years were spent as a journalist. First, she was a daily columnist for a newspaper that she and her first husband, Maxwell Peter Miller, ran and owned together. At the time, they lived in the twin cities of LaSalle and Peru, Illinois. From there, she and Miller were sent to Washington by her uncle, Col. Robert R. McCormick, longtime head of the Chicago Tribune. He asked her to be editor and Miller to be manager of the Washington Times Herald, which had just been purchased by the Tribune. Bazy acted as editor there for several years and later became a weekly columnist for the Tribune.

Tankersley’s other passion is raising Arabian horses. She has maintained her Arabian horse stud ranch in Tucson for the past forty years where she raises around fifty foals a year. Her stable is very actively engaged in showing the more athletic disciplines of these beautiful creatures.

As an offshoot of her twin passions for horses and education, she was active in the state of Maryland teaching riding to the deaf, and in Tucson where she started Therapeutic Riding of Tucson.

Tankersley is a long-time friend and supporter of the University of Arizona. She plans to leave her Arabian horse farm to the Animal Science Department of the University and her residence to the Southwest Center in the College of Social and Behavioral Sciences. 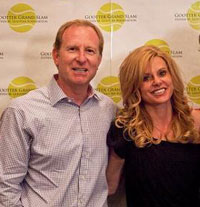 The Sarver family legacy is one of strong work ethic, tremendous fiscal savvy, solid commitment to the needs of the community, and extraordinary generosity in the advancement of worthwhile charitable goals. Robert and Penny Sarver continue to embrace this tradition and have generously supported numerous worthwhile causes. The University of Arizona Sarver Heart Center and the Steven M. Gootter Foundation have greatly benefited from their generosity. Robert sits on the Board of Trustees of the Sarver Heart Center which he helped build, in memory of his late father, Jack. The Center is home to over 100 physicians and researchers dedicated to fighting heart disease.

Robert was born in 1961 in Tucson, Arizona and is the majority owner of the Phoenix Suns. A Sabino High School graduate, Robert earned his bachelor’s degree in business administration in 1982 from the University of Arizona. Penny is a native of Kansas City and earned her bachelor’s degree in business from the University of Oklahoma. Robert and Penny met in 1991 in Scottsdale and were married in 1996. Their family includes three sons: Max, Jake and Zach. Robert and Penny view their contribution of time and money not so much as a donation, but as an investment. It is an investment in the people working at the Sarver Heart Center, and an investment in the promise that they can discover new ways to prevent and treat heart disease.