The Gala dinner is celebrated with great food, live music, entertainment, silent and live auctions. Each year the Foundation presents an individual or couple who has demonstrated exemplary philanthropy with the Steven M Gootter Philanthropic Award.

The Gootter Grand Slam Tennis Pro-exhibition features matches with former professional tennis champions. The event is held in honor and in memory of Steve Gootter, an accomplished tennis player and athlete.

The 2015 Gootter Grand Slam featured the most successful duo of all time, the Bryan Brothers, and French Open Champions Murphy and Luke Jensen. It was a sold out event and a thrilling tennis exhibition at The Westin La Paloma Country Club.

Twin brothers Robert Charles Bryan (Bob) and Michael Carl Bryan (Mike) are American professional tennis double players who are the best tennis team in history. The twins have won multiple Olympic medals, including the Gold in 2012 and have won more games, matches, tournaments and grand slams than anyone in history. They have been the World No. 1 doubles players longer than anyone else in doubles history. They have also finished the ATP year-end number 1 doubles team a record 8 times. 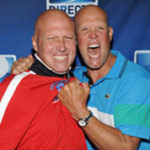 Luke and Murphy Jensen – In 1993 Luke and Murphy Jensen won the French Open. The irreverent pair of brothers battled their way to being arguably the most popular players in the game at the time.The win by the Jensens came at a time when the popularity of tennis was on a downslide. So when media wanted to do tennis segments, most of the top pros would not participate. Enter the Jensens. “I got to live the dream,” said Murphy, “If I could imagine what a rock stars life was like, I got to do that with a tennis racquet. Our whole success was based on daring to be different.”